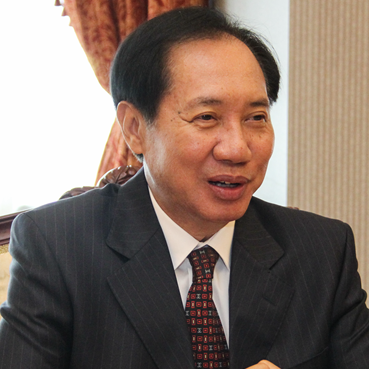 Dr. Bhokin Bhalakula currently holds 3 positions; he is the President of Thai- Chinese Culture and Economy Association, the Chairman of the Board for Pridi Banomyong International College, and Vice Chairman for Pridi Banomyong Foundation. Dr. Bhokin achieved his Bachelor of Laws with honours at Thammasart University. There he continues pursuing his education and finally received Docteur de Troisieme Cycle at L’Université de Paris VII in France. While living in Bangkok, he has served as the Deputy Prime Minister, then as the Minister of Interior. In 2005, he was appointed as the President of the House Representatives and President of the Parliament. After that, he was the Adviser to the Prime Minister in 2013 to 2014.

Dr. Bhokin involves in many activities and endeavours. His contributions receive praises, awards and royal decorations such as the “Commander First Class of the Royal Order” by King Gustav of Sweden, “Chevalier – Ordre National de la Legion d’Honneur” in France, “Knight Grand Cordon [Special Class] of the Most Exalted Order of the White Elephant” and others to name a few.